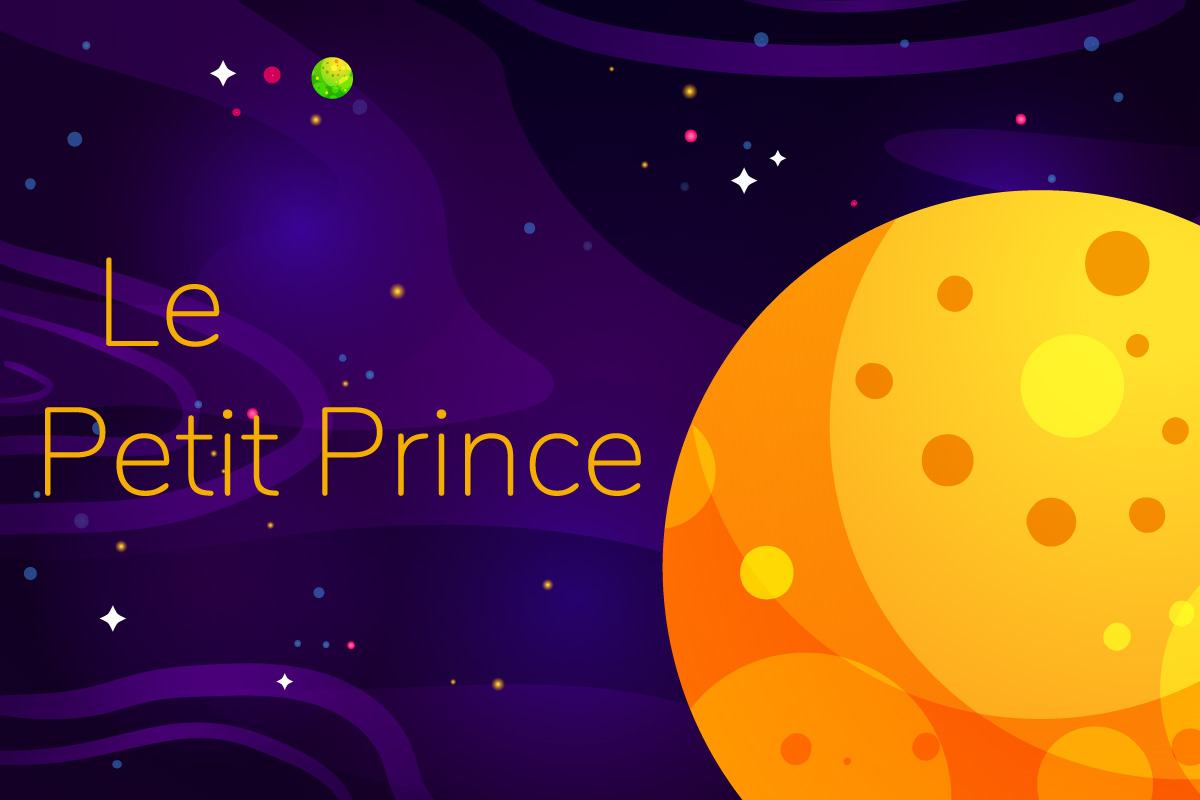 Films, cartoons, TV series, comic books, theme parks, museums, exhibitions, specialist stores and merchandising… The Little Prince has become a brand in its own right, and its success continues to flourish.

Reading The Little Prince in French is a great way to improve your French language skills:

All this is possible with any French book, right? Yes, that’s true, but The Little Prince tells a story based on pictures and Antoine de Saint Exupéry uses short sentences, so you can enjoy reading and improve your French.

You have probably already come across, read, offered or told about The Little Prince. This is very likely because it is the most translated book in the world after the Bible.

The Little Prince is a real publishing phenomenon, published to date in more than 500 languages or dialects, and since its birth it has attracted millions of readers every year.

The beginnings of The Little Prince

Do you know who Antoine de Saint-Exupéry, the father of The Little Prince, was? The answer is just like the Frenchman himself: a writer and cartoonist, Saint-Exupéry was also a pioneer of aviation, a pilot, both civilian and military, a daredevil adventurer, an environmentalist before his time, a humanist, a cartoonist and a poet, as well as a committed journalist and a fighter.

Born in 1900, Antoine de Saint-Exupéry was fascinated by aviation and, at the age of 12, made his first flight. In 1922, he did his military service in the air force and obtained his pilot’s license.

His other passions, literature and painting, are due to his mother. His first book, Courrier Sud, was published in 1929 while he was living in Argentina, flying planes that transported mail between the American continent and Europe.

Vol de Nuit, published in 1931, brought him immediate fame among the general public, as well as the Prix Femina, one of the most prestigious literary prizes in France.

The Little Prince has two birthplaces and two birth dates:

It was first published in New York in 1943, while its author was in exile in America since 1940. It was there that he met a New York publisher who suggested he write a children’s story to be published for Christmas.

It was from this spark that The Little Prince was born.

The book, illustrated with watercolors by the author, was first published in English, then posthumously in France in 1946. Antoine de Saint-Exupéry never knew the incredible success of his work: he died during a routine flight, his plane crashing into the sea off the coast of Marseille.

Whether it was suicide, a technical failure or an enemy attack remains a mystery.

The story of Le Petit Prince

The Little Prince lives on a tiny planet, called Asteroid B 612, which he looks after with great care: every day he cleans up around his 3 volcanoes, he makes sure that the dangerous baobabs do not hide among the grass. These gigantic African trees, so majestic on the planet Earth, would make the tiny Asteroid B 612 burst.

And he is in love, madly in love with a rose that has grown overnight, as if by magic, on his planet. But this rose, vain and capricious, upsets the well-ordered life of Le Petit Prince.

He decides to visit neighboring planets to see if he can find something or someone who can help him understand his rose.

He visits various asteroids and, on each one, meets an unusual person:

But none of them helps him to understand his rose.

The seventh planet he visits is Earth. There he meets

It is also on Earth that he will meet an aviator who is stranded in the middle of the desert and to whom he tells his quest and his latest adventures. The aviator is also the one who will tell us this story.

The aviator is Antoine de Saint-Exupéry.

The Little Prince will eventually return to his planet, rich in knowledge that will allow him to cherish his rose to its true value.

The Little Prince, a flourishing business

In 2023, The Little Prince will be 80 years old, at least in the United States. And since its birth, its success has never wavered. More than 200 million copies have been sold worldwide to date, and more than 5 million are sold each year.

All this in more than 500 languages and dialects: from Korean to Bambara, from Berlin dialect to Munich dialect, from ancient Greek to Klingon… that alien language spoken by characters from Star Trek: Entitled Ta’Puq Mar, this new version of Saint-Ex »s book has won the Deutscher Phantastik Preis, a prestigious German literary prize…

The Little Prince has never ceased to amaze us.

Yet the royalties on books sold are hardly worth anything these days… except in France! The Little Prince is now free of copyright in almost all countries, because it is now in the public domain.

But not in France… In France, the works of a hero are protected for 88 years and 120 days (don’t ask me how we arrived at this ingenious calculation), and as Antoine de Saint-Exupéry is considered « Dead for France« , we will only be able to share, copy and adapt The Little Prince from 2032.

In any case, the real jackpot comes not so much from books as from merchandising: toys, crockery, clothes, bags, but also Mont Blanc pens, Moleskine notebooks, IWC watches, Play Toy figurines and the Sofitel hotel chain…

And if you’re ever in Paris, why not go to the Musée des Arts Décoratifs, where an exhibition of the original manuscript of The Little Prince, which until now had never left the Morgan Library & Museum in New York, is on show until the end of the month.

Quotes from Le Petit Prince to savor, to meditate on

Although The Little Prince was written in French, it is still a great book for learning the language. Its simple and straightforward writing style makes it easy to understand, even for beginners.

Additionally, the story itself is fascinating and full of valuable lessons that can be applied to everyday life. If you’re interested in learning French, I highly recommend reading this classic tale.