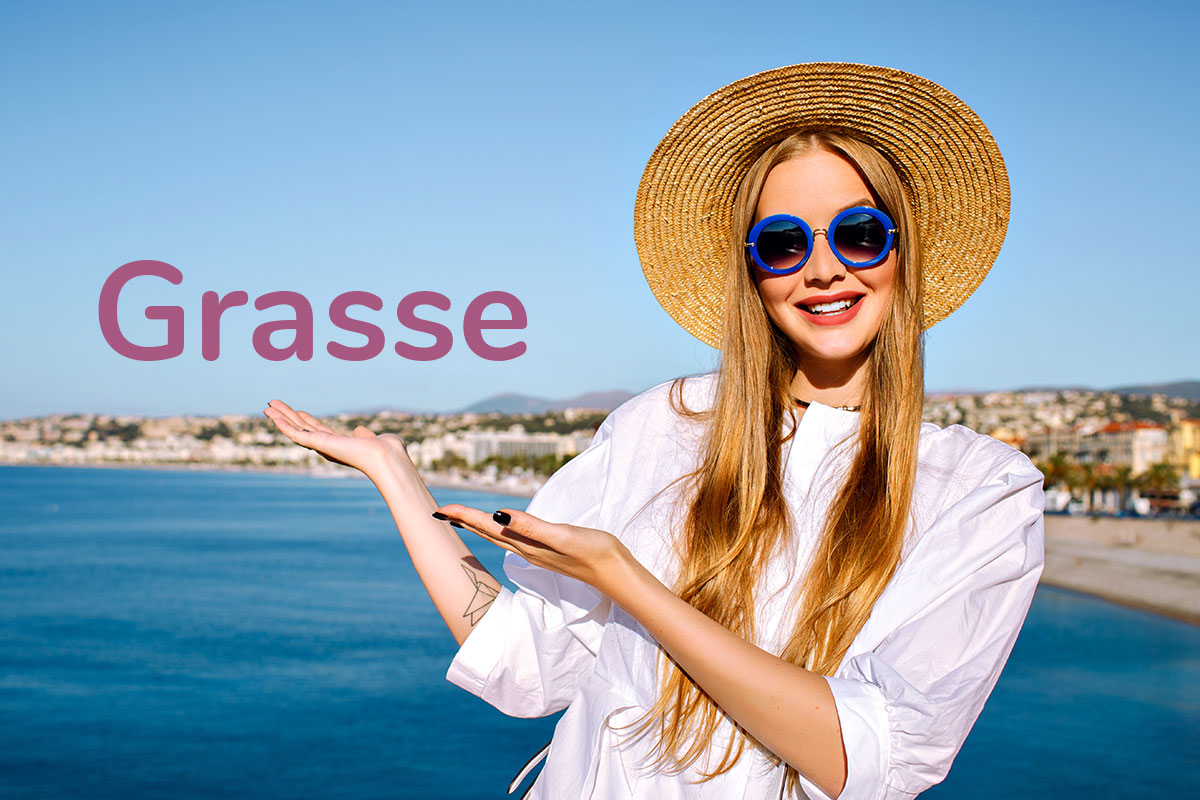 Today, I’m going to take you for a walk in the hinterland of the French Riviera, to discover Grasse, a city of 50,000 inhabitants, located 12 km from the Mediterranean coast, north of Cannes.

The city covers a vast area and has a wide range of altitudes: from less than 100 meters above sea level, it rises to more than 1,000 meters. For more than five centuries, the city of Grasse has been known as the world capital of perfumery.

An ancestral know-how that has been developed and transmitted from generation to generation to make what was once a poor hamlet, one of the hubs of the fragrance industry in the world and one of the jewels of the French economy.

Its history, very interesting, is an example of a Success Story in the Provencal style… In the Middle Ages, around the year 1000, Grasse was only a tiny village whose inhabitants barely subsisted thanks to meager food crops and the breeding of sheep and goats.

But two centuries later, the city underwent its first metamorphosis and became a free and independent merchant republic, like Pisa and Genoa, powerful Italian cities of the time with which Grasse signed treaties of alliance and trade.

It was only in the 12th century that the city became truly prosperous. And undeniably, one of the factors of its wealth was based on activities that it had already been practicing for centuries: the breeding and trade of skins.

Grasse tanners acquired a reputation unequaled in the Mediterranean region and became extremely wealthy. (A tanner is someone who transforms the skin of an animal to make leather).

Indeed, Grasse was renowned for the quality and fineness of its leather and specialized in the manufacture of leather gloves. All the nobility of the area bought gloves from Grasse, whose unrivaled reputation reached as far as Paris and London.

Some glove makers had indeed an order book that went far beyond the borders of the Côte d’Azur. The fashion was launched.

The smelly beginnings of perfumery

The leather craft had a notorious disadvantage: the nauseating smells that came out of the tanneries… And in the 12th century, it was a real pestilence that reigned over the city of Grasse.

Indeed, to soften the leather and make it softer, the tanners used at the time urine and excrement, which made the air unbreathable in the streets of the city.

Between the 12th and 16th centuries, Grasse stank like crazy, and despite their quality, the leather accessories produced in the city also smelled bad, which made its wealthy clients complain and begin to turn away from these products.

Seeing that his turnover was drastically decreasing, Jean de Galimard, a tanner settled in Grasse, had a genius idea: to mask the odors that bothered his customers so much, he decided to soak the gloves he was making in various waters scented with lavender, mimosa or orange blossom, fragrant plants that grew in abundance in the area.

His technique was a great success among his customers and his colleagues hastened to imitate him. But what brought Jean de Galimard absolute fame was an extraordinary « marketing coup« : he offered a pair of perfumed gloves to Catherine de Medici.

She thus became the first influencer in history to do a product placement! 😂

Enchanted by this gift, the Queen of France introduced him to the court and soon all the aristocracy wanted to own gloves perfumed by Galimard, who thus became the official supplier to the court.

In addition to gloves, he developed perfumes, oils and scented ointments that were very successful among his prestigious clients, whose first quality was not, as we know today, personal hygiene! The craze for the products brought by Galimard was such that in 1614, Louis XIII created the guild of « Maîtres Parfumeurs et Gantiers« , which marked the beginning of a unique know-how in the world.

Developments in the horticulture of Grasse

From the second half of the 18th century, Grasse, until then known for its tanneries, began to cultivate perfume plants which grew wonderfully due to its mild climate, its particular slope, the richness of its soils and the profusion of springs and waterways.

Horticulture thus became a complementary resource for the poor peasants who planted fields of lavender, mimosas, orange trees, myrtle… Crops that they then enriched with new plants that the explorers of the time brought back from Africa, India or America: jasmine, tuberose, musk, amber, citrus fruits, roses…

Grasse found itself surrounded by fields of flowers as far as the eye could see. The city, which a few centuries earlier smelled of carrion, was then dubbed the Perfume Capital of the World. And the number of perfume houses exploded.

In the 19th century, the most famous perfumers in the world had settled in Grasse and the vast majority of essential oils were produced in the surrounding area.

And it was in the flower fields of Grasse that Coco Chanel and Ernest Beaux, former perfumer to the Russian czars, developed their first fragrance: the iconic N°5.

It is a complex bouquet of about 80 ingredients, including the May rose, a rare and fragile flower that grows in the region. The House of Chanel contributed to the local economy by signing exclusive agreements with certain local producers in the 1920s to ensure that the quality of the flowers remained the same.

And what about today?

The Maison Galimard, descendant of the tanner with perfumed gloves, still exists: it is one of the largest perfume factories in Grasse and its international reputation is now undeniable.

Today, the fragrance industry in Grasse continues to flourish: the 70 companies in this region generate a turnover of 2.7 billion, which constitutes 10% of the world’s turnover in fragrances and flavors.

The quality of the flowers grown here is very special, and the undisputed queens of the Grasse gardens are the centifolia rose, the tuberose and the grandiflorum jasmine, whose delicate yet powerful scent is incredible.

The third largest export sector in France, the perfume and cosmetics industry is one of the jewels in the crown of the French economy, thanks to large international groups such as Chanel and L’oréal, but also to very small companies and small and medium-sized enterprises (SMEs), which account for 80% of the activity.

And Grasse, with its ancestral know-how and its floral production of undeniable quality, holds an important place in this success.

Moreover, in 2018, UNESCO registered the crafts related to perfume in the Grasse region as Intangible Heritage of Humanity: the cultivation of the perfume plant, the knowledge and transformation of natural raw materials and the art of composing perfume now enjoy both official and symbolic recognition.

From the cultivation of the flower to its transformation, from the luxury industry (with perfumes and cosmetics) to the production of flavors for food, this is a major economic pole that represents more than 5,000 direct jobs and 10,000 induced jobs in the region.

And that’s not counting the 2.5 million tourists who visit the Perfume Capital of the World, its aromatic plant gardens, the Perfume Museum and the various perfume factories each year.

So if you ever pass through the French Riviera, don’t forget to stroll through Grasse.

The city lends itself well to a trip back in time, with its winding streets, its sumptuous residences, testimonies of its glorious past, its breathtakingly beautiful views of the Mediterranean and the Alps, its gardens and fields full of flowers as far as the eye can see.