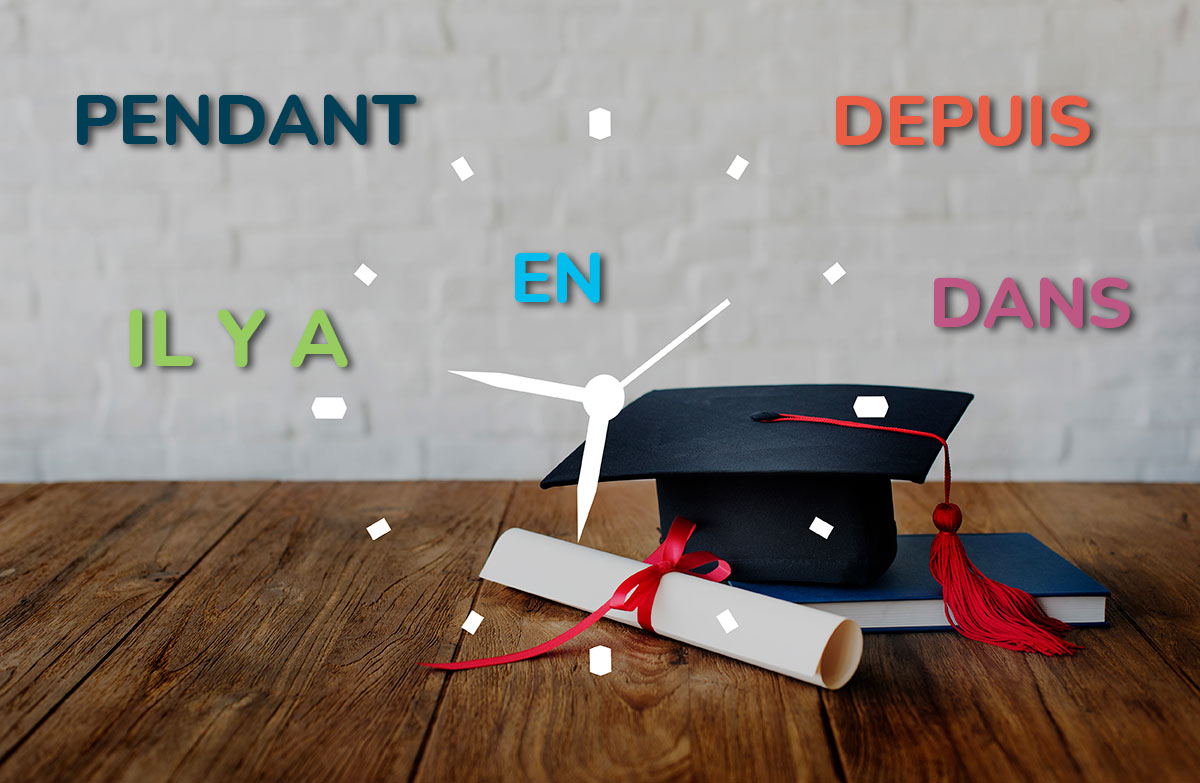 Hi, today I’m going to teach you a super simple way to say how long something will last in French. Forget all those complicated grammar rules that will only confuse you!

This lesson is for everyone, beginner learners, intermediate learners and even advanced learners, so let me show you what it’s like on the other side.

Summary table of the use of Depuis, Pendant, En, Il y a and Dans

But let’s look at these prepositions of time to express duration in French in more detail.

We’ll start with a little diagram – a drawing – it’s always easier that way!

Where are you going to put the following words that express duration: il y a, dans, pendant, depuis and en?

Don’t look at the answer key right away, but try to find the answer based on what you already know and the summary table above.

I will explain each preposition in detail and then I will post the correction.

It expresses the same idea as « ago » in English.

Attention, we do not use a date with, but a duration between the date of the event and today.

Depuis expresses a duration that began in the past and continues as we speak.

We can also use SINCE with a date. We will always express a duration but taking the given date as the starting point.

Dans expresses the duration that separates an action between the present moment and a moment in the future.

Pendant is the magic word to express a duration. You can use it in many situations, with verbs in all tenses.

⚠️ Be careful, because very often students use the word pour instead of pendant!

En is the most difficult preposition of duration to understand because of its particular use.

First, you know that the word en has multiple uses. It can be:

Here, we are interested in the word en to indicate duration in French.

En gives us additional information to the simple indication of duration, it clearly expresses that 100% of the action of the verb has been performed.

For example, what is the difference between these two sentences:

In the first sentence, we just know that Anna has learned French for six months. But what is her level of French? We don’t know. Maybe she is A2, B1 or B2?

Whereas in the second sentence, we always know that the duration of learning French lasted six months but we also know that she finished learning! She knows all the French.

If you want, you can download the Little Bonus PDF, in which you will find:

Yes, I know, a dictation… Pffff! But this way, you will be able to see, in situation, the words I just explained to you. It’s a great way for you to understand them, memorize them and then be able to use them without making mistakes.

Preposition of time in french

Before leaving, let’s take this little quiz together to see if you understand 😀

📌 Free PDF Bonus:
Do you want to do more exercises on prepositions of time in French and have the correction? Have a summary sheet of the lesson?
Then download the free Bonus PDF!

And as always, the best way to improve your French is to speak as much as possible! Have confidence in your French and speak!